This MasterChef winner believed her life was over when she developed a rare autoimmune disease and lost her vision. In actuality, it was only getting started.

If you’re a big fan of “MasterChef,” one of the most watched cooking programs on television, chances are good that you remember the powerful Ms. Christine Ha, who was the competition’s first and only blind candidate. You might probably remember how this charming Vietnamese American chef beat all expectations to win season three’s title.

The chance to try out for MasterChef presented itself to Ha in 2012 while she was studying a master’s in creative writing at the University of Houston. Ha claimed she entered with the intention of documenting the experience for a school paper, not expecting to win. Ha rapidly shocked herself, too, as she started to astound the judges and fans from all around the world who were watching a blind cook rise to the occasion. She used simple ingredients with strong tastes her mother formerly employed to create a Thai vegetable salad, braised pork belly steamed in coconut soda, and a coconut-lime sorbet for the final competition.

Ha won the MasterChef championship, a cash reward of $250,000, and a cookbook contract after the judges praised her incredible performance.

She was able to beat over 30,000 home cooks from throughout America thanks to her perseverance and tenacity, and she impressed all three “MasterChef” judges—Gordon Ramsay, Graham Elliot, and Joe Bastianich—during the competition. 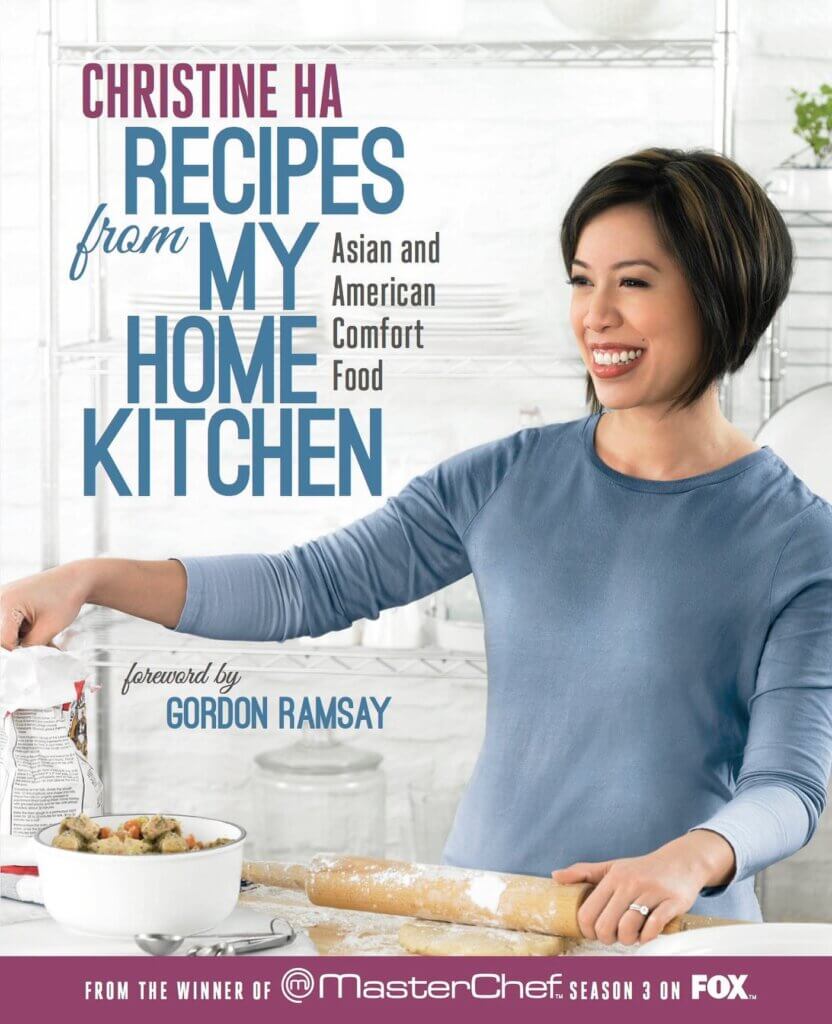 Christine Ha became one of the most memorable candidates to ever appear on “Masterchef.” She became an inspiration to budding cooks all over the world thanks to her boldness, perseverance, and dedication.

The response was tremendous. Though many of the responses she received were encouraging, Ha recalled some cynics who questioned if she would ever be independent or be able to cook over a fire or a hot stove. Ha was wiser.

The chef completely lost her vision by the age of 28. She learned braille and walked with a cane as her MasterChef career took her all over the world. She traveled the nation to demonstrate her culinary abilities on cooking shows while hosting pop-ups and cooking demonstrations. Recipes From My Home Kitchen, Ha’s debut cookbook, was published in 2013. Ha claimed that at some point, she was prepared to start a restaurant.

From the ‘Blind Cook’ to ‘The Blind GOAT’ Ha established her first restaurant, The Blind Goat, this summer, adding to her long list of triumphs. The author refers to the casual restaurant in downtown Houston as “a modern Vietnamese gastropub,” and its menu has dishes influenced by Southeast Asian street food.

The play on her nickname, “The Blind Cook,” and her zodiac sign in the Vietnamese calendar led to the restaurant’s name. Later, Ha discovered “GOAT” or “G.O.A.T.” is also a common Internet slang term for the Greatest Of All Time. She laughs, “I’ll take that.”

In September 2020, Ha and chef Tony J. Nguyen opened Xin Chào, which had been nominated for the James Beard Foundation’s award for Best New Restaurant in America in 2019. 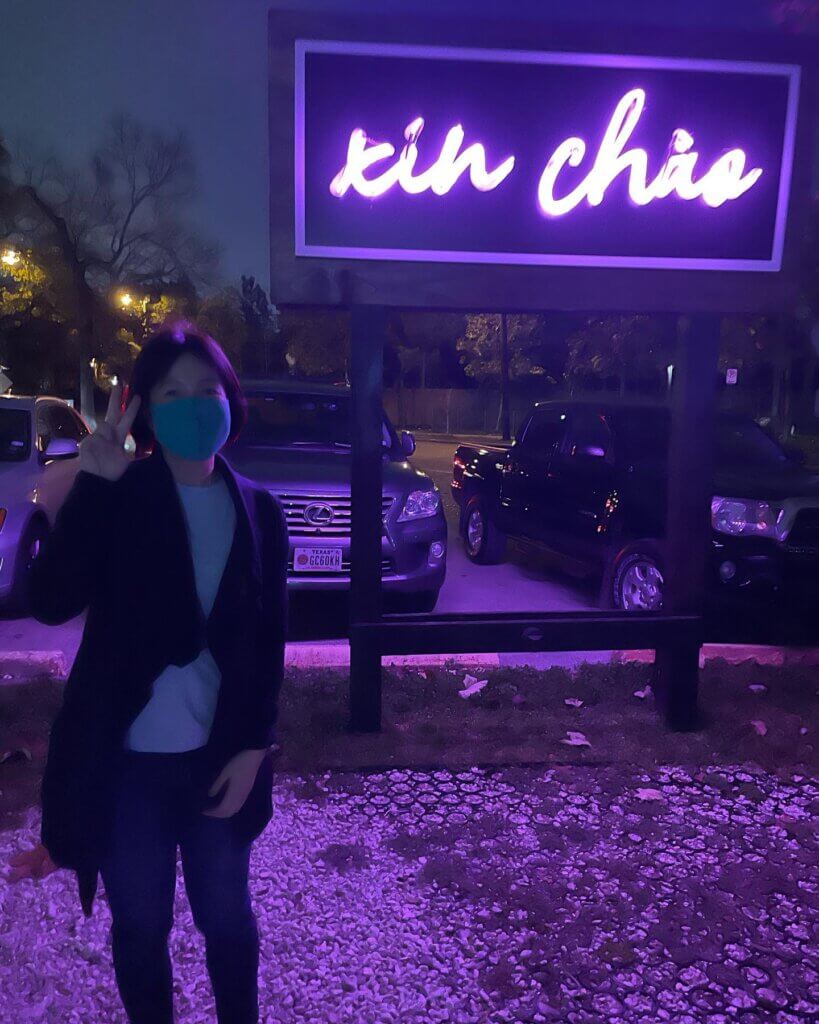 *Quick photo after a long day, the beginning of a new journey.

As a woman of color and a person with a disability in this predominately male-dominated sector, Ha remarked, “I’m pleased to prove that this is me; it’s doable.” Additionally, it has provided her a platform to demonstrate how people with vision impairments who love to cook can adjust and speak up for themselves in the kitchen.

Ha must make sure her kitchen is accessible for people with vision impairments. That entails modifications like tactile bumpy stickers that tell her how hot the gas stove is at all times.

She explained that in her restaurant, modifications include showing staff members how to work with a visually impaired customer, reducing the distance she must go between stations, and making sure her tools are put back where she found them.

The process is frequently verbal, needing her to persuade others to feel at ease by taking her hand and placing it on an ingredient so she can position herself or alerting her when they have moved anything away from her station.

The MasterChef responded to a question about how having won the coveted MasterChef title had changed her life by saying: “My cookbook hit the top of the New York Times bestseller list. I currently co-host the cooking program “Four Senses” and previously served as a judge for “MasterChef” Vietnam. I get to visit different countries and take part in exciting events and campaigns. I give public speeches frequently.

But more importantly, MasterChef’s victory has given me a platform from which I can speak up for groups that are commonly marginalized, like women, people with disabilities, Asian Americans, people with vision impairments, and people who are poor.”

Continuing with the interview, Chef Ha shared the greatest challenges she faced “Obviously, learning to navigate in a world without my vision was challenging and the biggest obstacle I had to overcome to get where I am now, but I believe even more so, it was about developing self-confidence and realizing that I can still do a lot of the things I used to, albeit with some adjustments. We frequently work against ourselves and are the root of our own severe self-doubt.”

How about her favorite dish to cook? 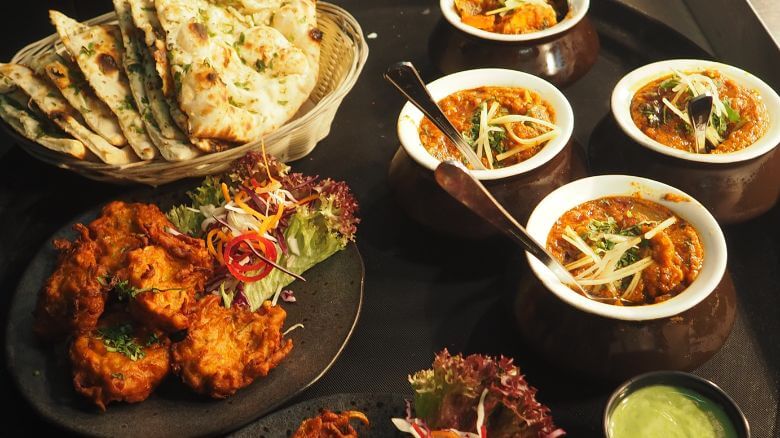 “Although I frequently hear this question, I don’t have a favorite food to make. Particularly when it comes to food, I adore variety. I enjoy tasting new foods in general, including while I’m cooking. Travel inspires me so much, and I often strive to recreate or improve the new things I experience at home. So, I suppose what I’m saying is that I enjoy cooking new foods the most. Humans should always be eager to learn new things!” Ha said there is no one right way to do it.

“You know your body best, I often say. Everyone has a unique journey,” told Ha. “Your best advocate is you… and it’s about determining your best self, including if you require more or less assistance.”

Ha emphasizes that persons with disabilities or loss of sense may always serve as role models for others, saying, “You are capable.”

But in all seriousness, Ha strives to surpass people’s expectations. 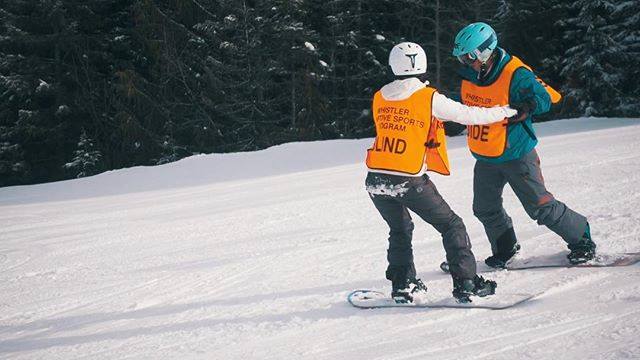 *Christine Ha on a snowboard

“I feel that being a woman, being Asian American, being a woman attempting to work in a commercial kitchen, having a vision impairment, and being all of these things might be seen as a handicap or as something less important. Therefore, I sometimes feel like others don’t hold me to the same standard,” she claims.

“I, therefore, give everything I do my all. And over time, that simply demonstrates to others that “hey, she has the tenacity and the resolve to keep pushing herself and other people’s viewpoints.” 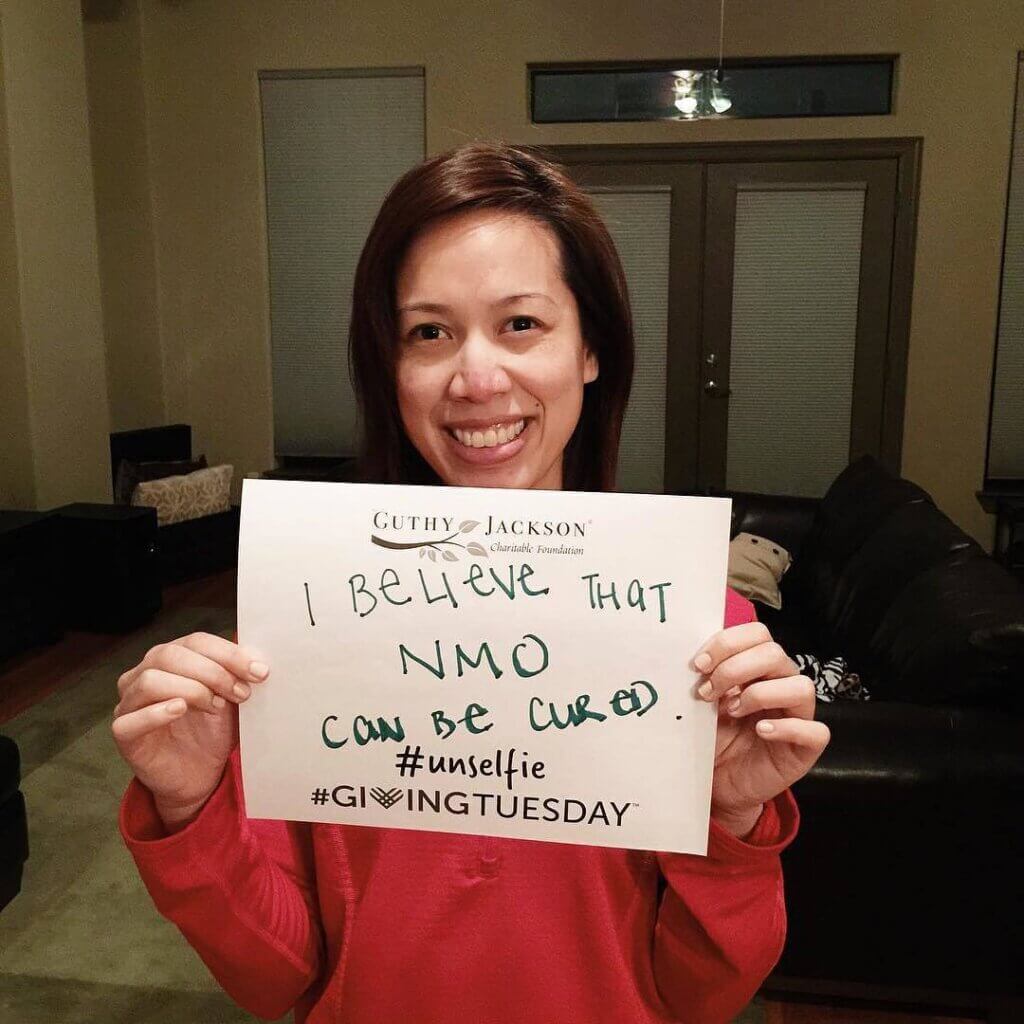 With the purpose of her most recent effort, “NMOSD Won’t Stop Me,” Ha is now assisting others in finding their bearings by sharing her tale. Ha is collaborating with the Siegel Rare Neuroimmune Association, the Guthy-Jackson Charitable Foundation, and the Sumaira Foundation to hold a contest in March that will inspire people with NMOSD and those who provide care for them to share their stories and spread awareness. Those who participate can receive an autographed copy of Ha’s cookbook, a chance to take a virtual cooking lesson, or the opportunity to speak with Ha in a private or small group setting.

According to Ha, people with NMOSD can manage their experience with the aid of advocacy groups and neighborhood services, and finding a medical staff “that’s ready to listen to you and support you” is crucial. 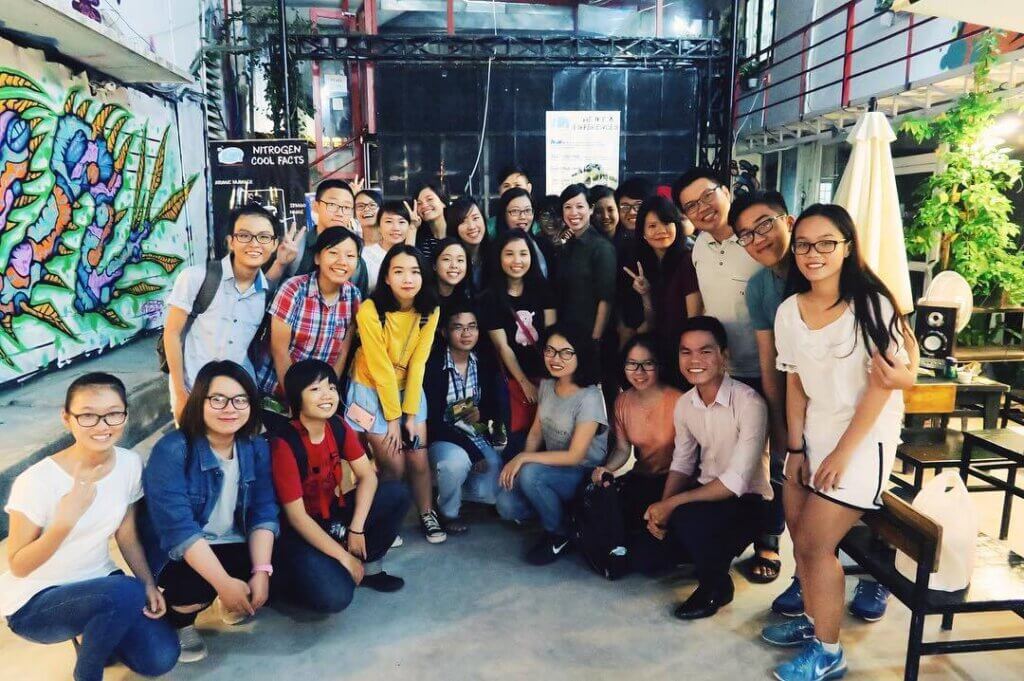 The beginning of “The Blind Cook’s” story has been widely reported, but this month, the James Beard Award-nominated chef shares every detail to inspire others to talk about the same rare inflammatory condition that took their sight. 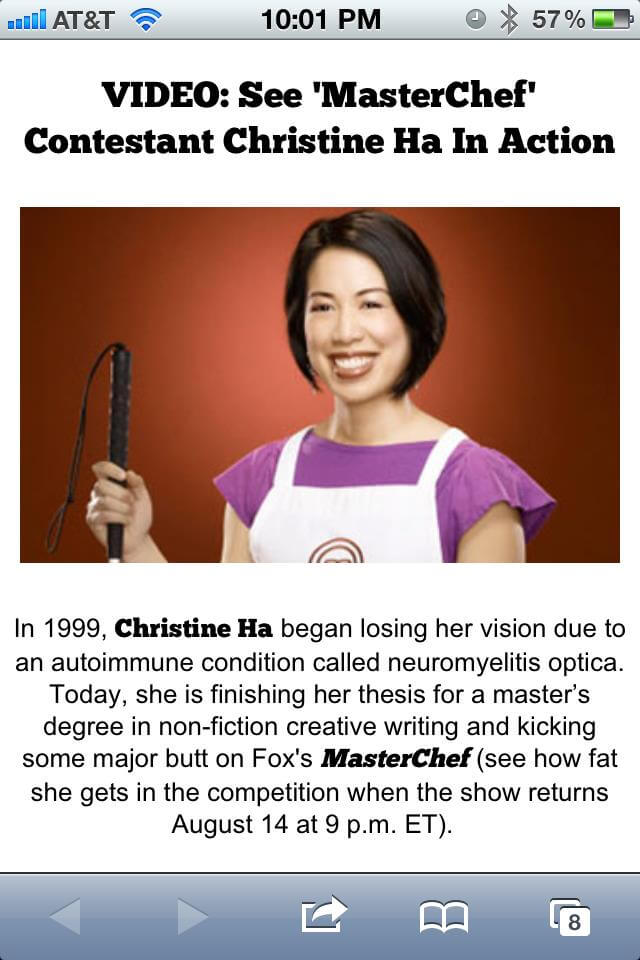